After much standing on the side procrastinating, reading various websites, blogs and how-to guides, I decided to get my hands dirty and take on a microphone modification. I had recently bought an Apex 460 valve mic from the states, and an upgrade kit from the very helpful people at Microphone-parts.com. The kit comprises everything you need to convert the stock Apex 460 into a very nice sounding mic. The stock mic sound is nothing special, but it’s only when I did a comparison with the modified version did I realise how big a difference the mod really makes. 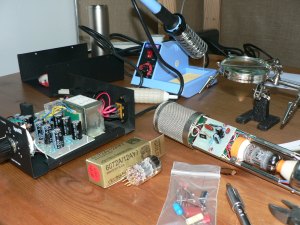 I spent the best part of a day doing this, but I was going slowly because it was

b) I was ultra paranoid about wrecking the mic

Here’s what I got, where I got it and how much it cost:

These items I already had lying around:

– A clean toothbrush and some cotton buds

So you can see that it’s actually quite cheap (compared to spending several hundreds of pounds on a valve mic). I’m not a particularly experienced solderer, I know how to do it and have done the odd repair job, but nothing major, and I’ve never desoldered and replaced components on a board before. I found the overall process of moderate difficulty, once I got the hang of desoldering it was actually quite quick. The kit recommends using the vacuum pump to desolder, but I also ended up using the braid in some places because it was easier and cleaner.

The first task is to swap out a pair of diodes in the power supply, this is fairly straightforward and a good way of easing yourself into the job, you have to make sure the power supply has been disconnected from the mains for at least 1 hour so all the caps have fully discharged and you avoid the risk of electric shock. Once this swap is done, fire up the mic and check all is ok, then it’s time to work on the mic itself. 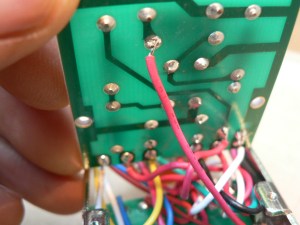 Opening up the mic, firstly you remove the old tube, which is held in place by a spring loaded pad at the bottom, once done you can unscrew the 2 PCBs from the frame, desolder the capsule wires and open up the 2 PCBs to access the joints on the underside. The very detailed and comprehensive instructions tell you exactly which components to desolder. A useful tip here is to always bring the soldering iron in from the edge of the board, to avoid burning any wires or components on it by accident (as I did!). The “helping Hand” tool was also quite useful here, allowing me to hold the PCBs at the best angles to facilitate access to the joints.

Once the necessary components had been removed, it’s time to repopulate the board with the new components (taking care to observe correct polarity for certain capacitors). The FOX SG kit comes with a bit of 4% silver solder (audiophile grade apparently), however I bought a meter of the stuff off Ebay, probably my soldering but I ran out of the stuff they provided before the last component was done. Once the components are in, time to clean the boards with the alcohol to remove flux and other contaminants (taking care not to get any on the polystyrene capacitors). 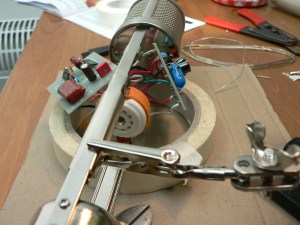 At this stage, they recommend testing the mic, probably wise, so put the new tube in, reconnect the capsule wires and plug in. Providing this goes successfully it is then time to remove the headbasket and swap the capsule. This was the bit I found most fiddly, probably because I was so paranoid of touching or damaging the new diaphragm that I ended up being over cautious. Suffice to say, it was actually quite straightforward in the end, and the new capsule was on in no time at all. The wires onto the PCB need to be trimmed as short as possible to reduce capacitance, but be careful here, I cut mine a little too short and had real trouble accessing the joints to reattach them.After a final clean and inspection it was time to reassemble and test.

Initial results were very encouraging, on vocals the mic sounded big, warm and deep, listening to the pre-mod version it sounded thin and harsh, this new mic is very smooth indeed, looking forward to putting it too work in the coming days. I did a quick comparison with a few other mics to get an idea of how it sounds:

I had been lent a Sontronics Aria for a few days to play with, which was perfect timing as it gave me a high quality reference to compare with. Although the Aria ultimately performs better (slightly quieter and smoother), it is over twice the price and the 460 holds it’s own very well.

As a final mod, I decided to remove 2 of the 3 layers in the headbasket, this took a bit of patience and fiddling with a pair of pliers to get them both out, I found using a sharp pointed object to prise up some of the mesh before getting stuck in with the pliers worked best.

So there you have it, if you are thinking about doing this and are reasonably handy with a soldering iron then I would thoroughly recommend it, the mic is quite easy to work with and the upgrade kit is great, well documented and the choice of components really makes a massive difference. I’ll be doing this again I think!

One thought on “Zen and the Art Of Microphone Modification”