I originally intended to replace both tube and capsule on this mic, but after experimenting and comparing I ended retaining the original capsule but with a replacement tube. In this post I’ll describe the simple tube change and give some audio examples. In the next post I’ll go over the capsule change. To be clear, the capsule upgrade made the mic sound different, rather than better, and based on what I already had in my mic locker I chose to return to the original capsule.This highlighted the importance of following your ears rather than what you read on the internet!

Okay, so here’s what you need:

A Rode K2 valve microphone ( I got mine second hand off EBay for £300 which is a fair price). These are decent mics and are very useable straight out the box. They are multi-pattern, very well made with a good quality power supply, cable and shockmount (unlike the Chinese valve mics often used for mods such as the Apex 460). The case is a bit tacky but you can’t have it all.

I learned a lot about the vintage tube market whilst researching these. Firstly, they are not cheap! You have to be careful as there are a lot of rip-offs out there, people trying to pass off newer tubes as vintage ones but fortunately there is a wealth of info out there to help as well as several reputable dealers that get recommended by many different people. I paid approx £125 for one from NOS Tube Store , their service was great and the tube was as described. This particular one is a sought-after Telefunken made in West Germany in the 1950’s. There are many other fine vintage tube options but I didn’t have the time and money to experiment, and this tube was highly recommended by a lot of people. If you want to know more and have time to burn, just check out the forums. Different tubes will impart a different sonic character to the mic so the ultimate test is to use your ears!

How to do it

This is very easy and I would recommend you try this first and see if you like the way it sounds. I recommend you record some different sources with the stock tube before you proceed, so you can compare afterwards and understand for yourself how the mics character has changed. 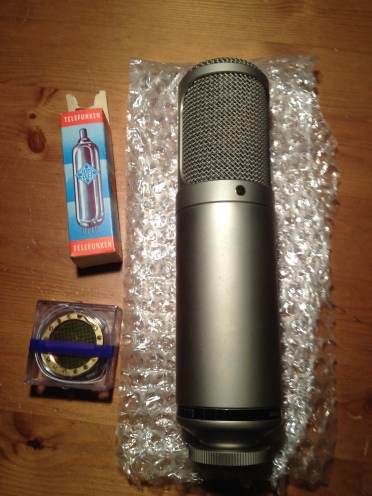 The tube is secured in position by a plastic clip which sits on top of the tube (pointy end) and the clip is held in place by 2 screws. Using a Phillips screwdriver, loosen both these screws and fully undo 1 of them to flip the plastic clip up and out of the way.

The tube can now be pulled carefully from its socket, a slight amount of wiggling (of the tube, not you) may help!

Carefully insert your new tube into the socket, it only fits in one orientation, make sure it is fully engaged. Replace the plastic retaining clip over the top of the tube and tighten the screws.

To my ears the NOS Telefunken tube makes the mic more mid-focused, the low frequencies are still clear, warm and big, the highs are a little less bright and sharp but the mid presence makes the mic cut through the mix more. I also find it more pleasant to listen to than with the stock tube, but it may not suit every application. I’ve presented some comparisons here to give you an idea of the difference. All clips were recorded via the preamps on my UA Apollo interface, I’ve endeavoured to maintain the same conditions and distances between mic and source for each comparison, but there may be small variations.

Judge for yourself and decide if this mod is worth the money, for me it’s a yes, but I will qualify it by saying I have other flavours of mic tonality in my locker, this adds something different, and it does it rather well.

In the next post I’ll describe changing the capsule and post some examples of the difference that makes.