Congratulations! You’ve decided that you want to take your music to the next level so you’ve hired a mixing engineer or producer. You’ve discussed how you want your track to sound, negotiated fees and worked out what particular brand of fairy dust the engineer is going to use… all you’ve got to do now is send over the audio so they can work their magic, right?

I decided to write this blog after reflecting on some of the experiences I’ve had working with audio brought to me by my clients. In some cases it’s audio they’ve recorded themselves – they may have even done a bit of editing or mixing on it too – or it’s come from another studio where they did the tracking. Either way, there is usually some work involved in getting it ready to mix.

Now I get it, as an independent artist you’re often on a tight budget and need to make sure you get the most out of your sessions. So let me help you with that right now: here are a few things you can do ahead of the session to ensure that whoever you hire doesn’t spend half the session tidying it up instead of mixing it for you.

Don’t get me wrong though, if you really don’t want to tackle any of these and are happy to pay someone to do it for you, then that’s fine. I for one will happily take on these prep tasks. But if you’d rather whoever you choose to work with can get down to doing their mix thing as quickly and easily as possible, then follow these steps:

Determine if the mix engineer uses the same DAW as you and can thus use your session files directly. Most engineers will support a range of DAWs:  for instance I have Pro Tools , Logic, Ableton and Reaper. If they don’t, you will have to export audio stems for each track in your project. In many ways this is easier for the mix engineer as they don’t need to worry about deciphering someone else’s project setup, but most of the following observations will still apply before you render.

If you are exporting individual tracks, make sure each audio file is clearly named. If you have used any processing, export a dry (unprocessed) track as well as one with all the processing on. Check with the engineer on their preferred format, usually 24bit wav at the sample rate of the project. Don’t automatically normalise the stems, but watch for digital clipping and if necessary reduce the gain on the track. Logic has a handy feature which normalises the track only if clipping is detected during bounce down.

Wherever you have edited audio clips, fade-in the start and fade-out the end of the clip, or where you have edited together audio clips, ensure there is a cross fade. I can’t emphasise this enough: I’ve had audio stems delivered with clicks and pops embedded in them as the edits hadn’t been cross-faded. It’s simple to do at the time and not doing it eats up way more time and effort further down the line – time that could be spent mixing.

Your mixer won’t have worked on this project with you for the last three years, so they won’t know the channel labelled ‘Bob’s wanger’ is actually a guitar part. So name the channels in a way that makes sense, and if a channel is labelled Peruvian nose flute then make sure there are only Peruvian nose flute parts on it. Obvious maybe, but it can and does happen, for instance when you’re recording through a single input channel and adding different instruments without creating new tracks.

Group your tracks by instrument

Keep all same / similar instruments together in adjacent tracks. So, all the drum kit tracks together, or multiple layers of guitar for instance. You don’t necessarily need to group them through busses or set up mix/edit groups as this is something the mix engineer may or may not do depending on their workflow.

Assuming you know the best takes for each instrument, assemble your various takes of a particular instrument / vocal into a single comp and consolidate it, making sure you check your fades / x-fades too. You can keep the old takes on a separate track in case you need to go back in there for something later on.

Generally, get rid of any EQ / compression / reverb added on the tracks, unless there are specific sounds you want to keep or illustrate to the mix engineer (for instance that gnarly delay you love or the way that filter sweep moves). Also remember that the engineer may not have the same plug-ins as you, so if there’s something you can’t live without, freeze / commit / bounce it down to a new track so it can be incorporated in the mix. This way the engineer has both the unprocessed audio and the effected sounds to play with

Unless absolutely necessary to demonstrate a particular effect or sound, remove all automation, especially channel volume / pan / mute automation as this can really confuse things. It’s usually not immediately obvious if there’s active automation on any parameters unless you specifically view the automation lanes. Make sure the automation settings are not in write mode either.

If you do need to automate volume (e.g. to balance gain between sections), ideally use clip gain (see the next point), or place a gain / trim plug-in in the channel and automate that.

Most DAWs support clip gain – use this to balance the levels of clips on each track so that the channel faders don’t need to be moved to extremes in order to hear something, and that all parts on a track are at roughly the right volume to be heard.

Remove any unused channels or muted / unused audio from the project, unless it’s stuff you think you may need later in the mixing process (e.g. that banshee wail you’re not quite sure about, or those 50 extra guitar / synth layers that you might want in the mix but can’t quite decide on yet). There’s no point in transferring 120GB of data when 110GB of that is out-takes that aren’t going to be used. This especially applies if you are transferring your files over the internet.

Use the ‘strip silence’, ‘compact’ and ‘save a copy in’ features of your DAW if they have them to remove unnecessary audio and files. Most DAWs have good file management features these days. Committing or Consolidating tracks is a good option here as it creates a single file per track containing only the audio you want to hear. 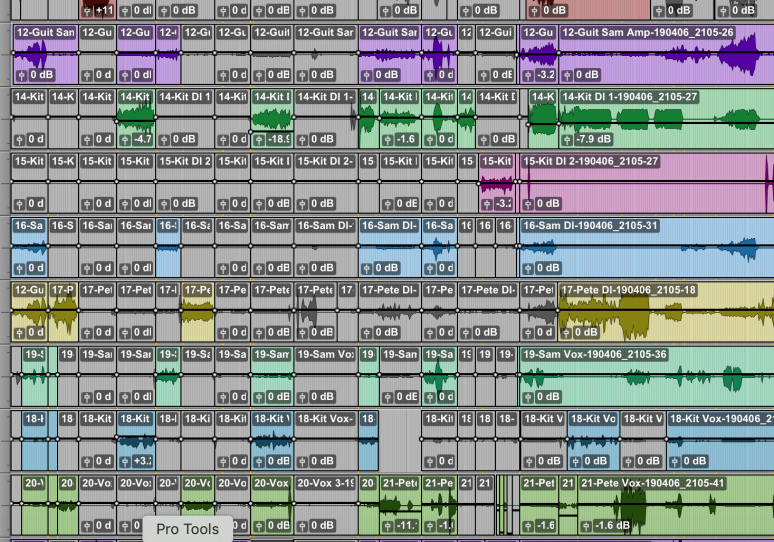 Help the mix engineer navigate the song by using labels / comments / notes. This is especially important if you are not going to be attending the mix session –any accompanying notes will always be useful.

Sometimes the audio will have been recorded in a studio with a console or other hardware for monitoring, or you may have a quirky recording set-up at home, and the project will have its I/O routing set up for that specific system. Remove the routings and set them so that all the tracks play back to a single master bus, this ensures that everything that has been recorded will be heard.

Did I mention this? Well let me say it again, Fade / Cross-Fade your edits!

Do all this, and your mixer will be able to spend their time doing what they do best – and you can get the most out of your budget.